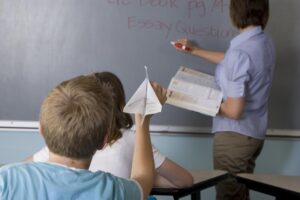 What is Oppositional Defiant Disorder?

Researchers have seen the onset of Oppositional Defiant Disorder (ODD) in 2% – 16% of children and teens. On average, it begins at the age of 8.

Oppositional Defiant Disorder (ODD) is a behavioral disorder in children, which involves a child’s disruptive behavior. They’ve a disorganized daily routine at home and school.

They will constantly throw tantrums, mood swings, are short-tempered, show recurrent patterns of anger, defy the authority of parents, are argumentative towards teachers, are hostile towards peers, and are uncooperative.

Such a condition can give a child a hard time positively interacting with someone.

Some symptoms associated with ODD are as follows:

There are no established causes of ODD. However, the Johns Hopkins School of Medicine has proposed two following theories for its onset.

According to this theory, it all starts when a child is a toddler. They may have a problem becoming independent of a parent or a loved one. While ODD is a severe disorder, this developmental issue persists even after the toddler phase.

This theory maintains that ODD is a reaction to the actions of parents or those in charge. It means that a child mirrors the negative interactions and misuse of authority from parents or other caregivers. This mirror effect leads to the development of ODD. Reinforcement of harsh discipline, abuse, or negative control will make a kid forcefully get what they want.

According to another established theory, a person’s genes account for 50% of ODD development. According to a 2016 research, some irregularities in children’s brains with ODD were observed. Those anomalies were found in those brain areas that facilitate analytical skills, regulate social behavior, and empathy for others. These abnormalities drastically influence the onset of ODD.

A therapist helps a kid with solving problems on their own. They also learn how to control their temper.

A kid learns how to interact with people and develop interpersonal skills.

Although medication isn’t the first-line treatment for ODD. However, it may be needed to treat the co-morbid conditions.

Children typically stop throwing unnecessary tantrums by the age of 4. But if your school-going child’s tantrums haven’t even begun to taper off, and their daily life is disrupted, that’s high time you should seek consultancy from an ODD specialist.